FIXIN is a performance  / installation with a musician’s body augmented by multiple digitally controlled engines. It questions the relation of the body to automation and the repetition of movement through a minimalist and immersive universe of sound.

Following on from the research with MILESDAVISQUINTET!, Sylvain Darrifourcq built a sort of “meta-drum” with parts (tom-toms, snare drums, cymbals…) prepared and animated by engines scattered around the space (solenoid percussive tools, vibrators and rotary engines).

The challenge is to make the engines communicate with the movement of the musician, continuously going back and forth from the machine to the body; expressing the double paradox of the automation of the human movement and the humanization of the machine (computer assisted programming) while posing the question: “who influences who?”. The sound creation is similar to industrial music: metallic tones, repetitive mechanical actions and rhythmic layering.

In total darkness, the installation slowly reveals itself through a minimalist and epileptic lighting setup, only rarely showing the whole set. 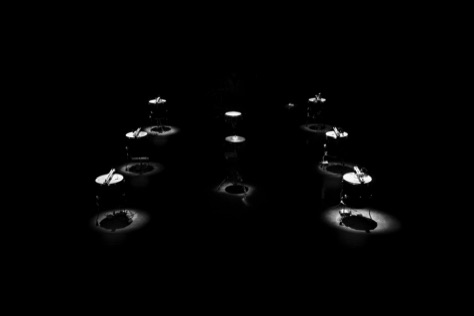